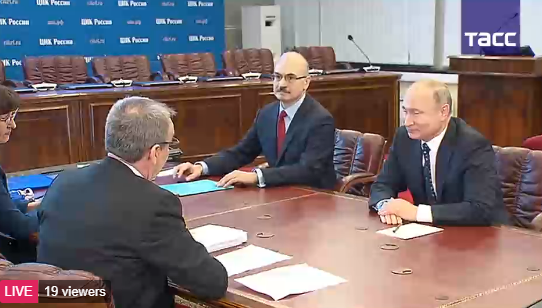 After skipping his nomination meeting yesterday, Vladimir Putin came to the Central Electoral Commission today to hand over his paperwork to register as an “independent candidate”. The procedure was broadcast live by TASS and only lasted for a few minutes. Putin smiled a lot and an electoral commission member told him, “Thank you, good luck.”

It is unlikely that the electoral commission will find fault with Putin’s registration, for example by questioning whether he can legally remain in office for a fourth presidential term, or asking whether he should have been criminally prosecuted for the murder of Alexander Litvinenko, the shooting down of flight MH17 with a Buk missile, or annexing Crimea for Ukraine – to name just a few of his crimes. The rules for Putin are slightly different from the rules for Alexei Navalny. But then again, Navalny doesn’t have the power to put the members of the electoral commission in prison.