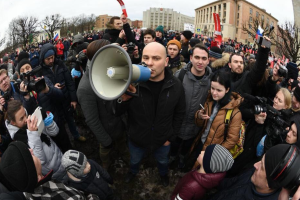 by Sarah Hurst Open Russia’s coordinator in St. Petersburg, Andrei Pivovarov, was detained in the entrance to his building this morning, swiftly put on trial and sentenced to 25 days in prison for his participation in the protests organised by Alexei Navalny on January 28. Pivovarov’s name appears […]

by Sarah Hurst St. Petersburg activist from the Vesna group Artem Goncharenko has been sentenced to 25 days in prison for “repeated violations of the rules of holding an action” for displaying a giant inflatable duck in the window of a flat during the January 28 protests organised […] 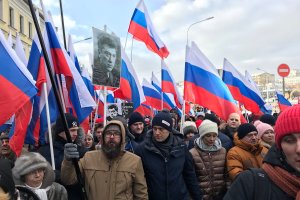 by Sarah Hurst Alexei Navalny was detained today on his way out of a dentist’s surgery. “My tooth hurt, I went to the dentist’s. I came out of the dentist’s – hello, second operative division, you’re detained. They’re taking me somewhere,” he tweeted. Earlier in the day the […]

Opposition activist gets one-year sentence in “mockery of justice”

by Sarah Hurst Opposition activist Dmitri Borisov, 32, has been sentenced to a year in prison by a judge at Moscow’s Tverskoy court for allegedly injuring a policeman during the anti-corruption protest organised by Alexei Navalny on March 26 last year. Borisov has already been held in pre-trial […]

by Sarah Hurst The minority ethnic republics of the North Caucasus and other parts of Russia are likely to produce the most fraudulent election results on March 18, and people there should act as observers to try to stop this, Alexei Navalny has said in a video published […] 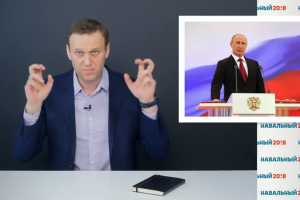 by Sarah Hurst Alexei Navalny has called on Russians to act as election observers on March 18 to register the fraud that is likely to occur. As he noted in a video published today, there were huge demonstrations after the fraudulent Duma election of December 2011. Since then […]

by Sarah Hurst In a video published today Alexei Navalny has ridiculed Russian authorities for desperately trying to ban his investigation into Oleg Deripaska’s yacht voyage to Norway with escort Nastya Rybka and Deputy Prime Minister Sergei Prikhodko. “It turns out that oligarch Deripaska has not just a […]

by Sarah Hurst In a video published yesterday that attracted global media attention (and has English subtitles), Alexei Navalny described how he found out that Russia’s Deputy Prime Minister Sergei Prikhodko had spent time on oligarch Oleg Deripaska’s yacht with escort women in 2016. Navalny followed a trail […]