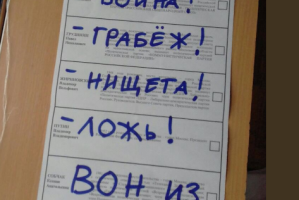 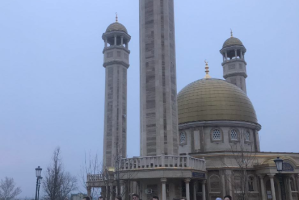 by Sarah Hurst Russia declared its polls open in Kamchatka and Chukotka this evening, with an official promising “I’m sure there are no violations,” while at the same time police surrounded Alexei Navalny’s campaign headquarters in St. Petersburg and detained supporters of Navalny all over the country. Navalny […]

Navalny supporters rounded up in Murmansk

by Sarah Hurst Several supporters of Alexei Navalny were detained yesterday and today in Murmansk, and one has already been put on trial. Yuri Fomin, who organised the January 28 protest in the city against Vladimir Putin’s rigged re-election, has been sentenced to five days in prison. This […]

by Sarah Hurst Alexei Navalny’s campaign coordinator in Kaliningrad, Yegor Chernyuk, was sentenced to 10 days in prison today in connection with his participation in the rally for an election boycott on January 28. Chernyuk and his deputy coordinator, Oleg Alexeyev, were detained yesterday after a search at […] 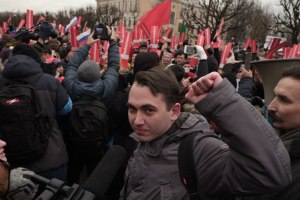 by Sarah Hurst Repressions against supporters of Alexei Navalny appear to be intensifying as the March 18 election approaches, with his campaign coordinator in St. Petersburg, Denis Mikhailov, being re-arrested today as he was about to come out of prison having served a 30-day sentence for his role […]

by Sarah Hurst Open Russia’s coordinator in St. Petersburg, Andrei Pivovarov, was detained in the entrance to his building this morning, swiftly put on trial and sentenced to 25 days in prison for his participation in the protests organised by Alexei Navalny on January 28. Pivovarov’s name appears […]

by Sarah Hurst Alexei Navalny was detained today on his way out of a dentist’s surgery. “My tooth hurt, I went to the dentist’s. I came out of the dentist’s – hello, second operative division, you’re detained. They’re taking me somewhere,” he tweeted. Earlier in the day the […]

Opposition activist gets one-year sentence in “mockery of justice”

by Sarah Hurst Opposition activist Dmitri Borisov, 32, has been sentenced to a year in prison by a judge at Moscow’s Tverskoy court for allegedly injuring a policeman during the anti-corruption protest organised by Alexei Navalny on March 26 last year. Borisov has already been held in pre-trial […]

by Sarah Hurst A judge in Tyumen has sentenced a volunteer at Alexei Navalny’s local campaign headquarters, Petr Kharitonov, to seven days in prison for speaking at the protest against Vladimir Putin’s rigged re-election on January 28. He was charged with “minor hooliganism”. Kharitonov held a sign at […]