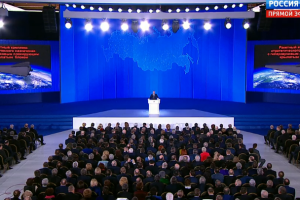 by Sarah Hurst Russia’s military might is its crowning achievement, Vladimir Putin made clear today in his annual speech to the Federal Assembly, as he showed a series of videos of nuclear weapons and prototype weapons that he claimed have no parallel anywhere else in the world. The […] 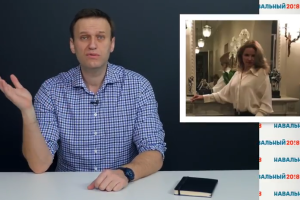 by Sarah Hurst In a video published yesterday that attracted global media attention (and has English subtitles), Alexei Navalny described how he found out that Russia’s Deputy Prime Minister Sergei Prikhodko had spent time on oligarch Oleg Deripaska’s yacht with escort women in 2016. Navalny followed a trail […]

Putin warns of “Saakashvilis” on the streets

by Sarah Hurst Vladimir Putin once again refused to say Alexei Navalny’s name at his annual press conference, instead comparing him to Mikheil Saakashvili in response to a question from presidential candidate and Dozhd TV reporter Ksenia Sobchak. Former Georgian president and Odessa Oblast governor Saakashvili has been […]

Navalny amused by US ice hockey players for Putin

by Sarah Hurst Today Alexei Navalny published a video about the luxurious US properties owned by NHL star Alexander Ovechkin and colleagues who have formed a “Putin Team” in advance of the election on March 18. Apparently living in the United States and becoming rich thanks to sports […]