Putin warns of “Saakashvilis” on the streets

by Sarah Hurst Vladimir Putin once again refused to say Alexei Navalny’s name at his annual press conference, instead comparing him to Mikheil Saakashvili in response to a question from presidential candidate and Dozhd TV reporter Ksenia Sobchak. Former Georgian president and Odessa Oblast governor Saakashvili has been […]

by Sarah Hurst Alexei Navalny has announced his manifesto for the Russian presidential election, scheduled for March 18 – from which he is still banned because of a conviction on fabricated charges. He launched the manifesto with a series of short videos drawing attention to the problems in […] 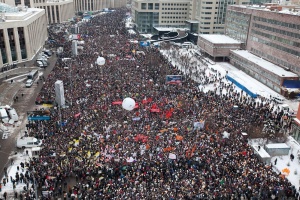 Navalny calls for a protest on December 24

by Sarah Hurst Alexei Navalny has called on his blog for a demonstration in support of free elections in Moscow on December 24, the anniversary of a huge protest that took place in 2011 after fraudulent Duma elections. Navalny is endorsing an event organised by Ilya Yashin, a […]

by Sarah Hurst Vladimir Putin demonstrated to Russians yesterday that he is the leader of the world’s most important superpower, making a surprise visit to Bashar al-Assad in Syria, and then seeing his ruthless counterparts Abdel Fattah el-Sisi in Egypt and Recep Tayyip Erdogan in Turkey. As Donald […]

Navalny on the march

by Sarah Hurst Alexei Navalny held three more rallies this weekend, in Barnaul, Novokuznetsk and Kaliningrad. Last time Navalny was in Barnaul, in March to open his campaign headquarters there, he was sprayed in the face with green chemicals while he was walking down the street. He wasn’t […]

Protester gets 18 months in prison

by Sarah Hurst A judge in Moscow has sentenced 33-year-old repair man Dmitri Krepkin to 18 months in prison for allegedly causing “serious pain” to an OMON riot policeman during the anti-corruption protest organised by Alexei Navalny on March 26. As Grani.ru reported, Krepkin was accused of hurting […]

by Sarah Hurst After attempting to create suspense by delaying his announcement, Vladimir Putin finally admitted today that he plans to participate in his own rigged presidential election on March 18. He did this at the GAZ automotive plant in Nizhny Novgorod, and was greeted by chants of […] 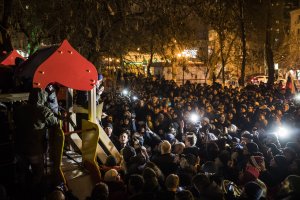 by Sarah Hurst Alexei Navalny held rallies in Saratov, Pskov and Samara this weekend, overcoming increasingly creative efforts by local authorities to stop him. In Saratov police confiscated his stage, and he was forced to speak in a children’s playground after a handful of “patriotic singers” occupied the […]

Leonid Volkov jailed for another 30 days

by Sarah Hurst Alexei Navalny’s campaign chief, Leonid Volkov, has been sentenced to 30 days in prison for trying to organise a rally in Nizhny Novgorod that was abandoned because Navalny himself was arrested on the day when it was due to be held. Volkov previously served 20 […]

Kaliningrad head teacher begs pupil not to overthrow the state

by Sarah Hurst Alexei Navalny’s campaign headquarters in Kaliningrad has published a video with a recording of a conversation between a 14-year-old volunteer, Alina, and the school’s head teacher, Valentina Gulidova, in the presence of her class teacher and her mother, who also participate. On his blog Navalny […]