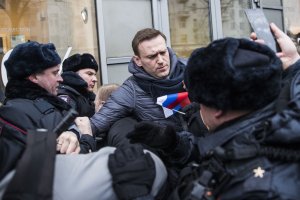 Thousands rally for an end to Putin’s farce

by Sarah Hurst Thousands of people all over Russia responded to Alexei Navalny’s call for protests today, and Navalny himself was forcefully detained while walking with supporters down Moscow’s Tverskaya Street. Police manhandled him and loaded him in a prone position into one of their vehicles, driving him […]

by Sarah Hurst Volunteers at Alexei Navalny’s campaign headquarters in Cheboksary have filed an application to hold a rally on January 28 calling for a boycott of the presidential election. As local campaign coordinator Semyon Kochkin explained in a video published today, the election is merely Putin’s “re-appointment”, […]